Remarks: Zoe-Lee Buhler, 28, was arrested for incitement over a Facebook post that allegedly encouraged a prohibited gathering in Ballarat on Saturday. Victoria Police has faced backlash and rightly so; this backlash has come from across the country and even internationally over the video, which has been viewed more than 7.5 million times online. FULL STORY HERE: https://www.4cmitv.com/2020/09/08/2020-sep-06-update-on-pregnant-woman-arrested-for-freedom-day-facebook-post/

ZOE-LEE BUHLER: A pregnant Ballarat mother who was arrested by police yesterday over a planned anti-lockdown protest says she didn’t realise it wasn’t allowed. Zoe-Lee Buhler allegedly started a Facebook event to organise the protest for Saturday.

Yesterday, police knocked on her door and took her away in handcuffs.

She has been charged with incitement.

She says she wasn’t aware the protest was illegal.

“I didn’t realise I was not allowed to do that,” she told Tony Jones.

“I was aware that the protest coming up in Melbourne wasn’t permitted, but I thought, in Ballarat, we’re in Stage 3 lockdown.

“I had a bit of a bimbo moment and I actually didn’t realise that it wasn’t okay.”

But she says she doesn’t regret her actions.

“I probably wouldn’t change anything to be honest,” she said.

“If the police had just called me and told me to remove the post I would’ve done so.”

Secretary of the Victorian Police Association, Wayne Gatt, says he can’t fault the conduct of the police who arrested Ms Buhler.

“They’ve clearly explained what it is they’re there for. You can’t point to a single thing that those officers have done wrong,” he told Tony Jones, filling in for Neil Mitchell.

Mr Gatt said organising a protest during COVID-19 rules is a serious situation.

“What’s being alleged here and in situations like this … they could be seen as trivial or they could be seen as really, really risky for our community. “6.5 million people are under restrictions at the moment and we are so close to seeing them lifted. “It is selfish actions, it is irresponsible activities, people planning protests like those alleged here that can impact millions and millions.”

The right to peacefully redress grievances would NOT be respected, but punished, says top Victoria cop

Is this crackdown on people protesting a draconian police state happening in China or Australia? It’s becoming a distinction without a difference as the Australian state of Victoria. Coincidentally Victoria took $1 TRILLION from the Chinese for “infrastructure” — the ONLY Australian state to take ANY money. And it’s an “infrastructure” that Chinese dictator XI would be proud to call his own.

“Freedom Day”, the protest against draconian police measures, has now taken place. It is the event for which a pregnant woman was manhandled by police, handcuffed in her home and taken away in tears, fore merely posting about it on Facebook.

Is this crackdown on people protesting a draconian police state happening in China or Australia?

It’s becoming a distinction without a difference as the Australian state of Victoria. Coincidentally Victoria took $1 TRILLION from the Chinese for “infrastructure” — the ONLY Australian state to take ANY money. And it’s an “infrastructure” that Chinese dictator XI would be proud to call his own.“Freedom Day”, the protest against draconian police measures, has now taken place. It is the event for which a pregnant woman was manhandled by police, handcuffed in her home and taken away in tears, fore merely posting about it on Facebook. 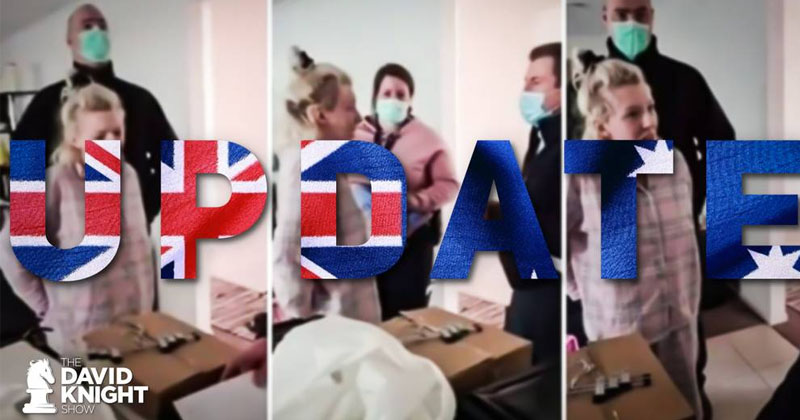 In spite of threats from the police, 200 people showed up to stand for the liberties that just 6 months ago western societies took for granted.  Initial reports are 15-17 arrested, 150-160 fined by police.Assistant Commissioner Luke Cornelius had made it clear that the right to peacefully redress grievances would NOT be respected, but punished.

On the subject of their preparations Cornelius said, “We’re not standing by and waiting for people to come into the city.

We’ll be out there in the suburbs, we’ll be on the roads and in the public transport system to make sure everyone is complying with the restrictions. So if you find yourself on public transport on Saturday, coming into the city, you can expect that police will want to speak to you. Police will want you to explain which of the permitted reasons you have for leaving home. And of course, if you’ve left home in order to protest, if you’re outside of your five kilometer bubble (3.1 miles) you will be held in breach and you will be fined. And if you persist in your behavior and you don’t comply, you will be arrested in the interest of keeping everyone safe.”

He was unrepentant as well on the viral video showing the earlier arrest of the pregnant woman for posting on Facebook that outraged people worldwide. Instead of an apology, they doubled down and even threatened anyone daring to speak out through public protest and question government orders.

“The optics of arresting someone who is pregnant is terrible,” said Assistant Commissioner Luke Cornelius, “We’re absolutely satisfied that in those circumstances the members behaved appropriately and in accordance with our policies. Now I’ll make some observations about handcuffing policy, we don’t have a rule that in every case when you arrest someone you handcuff them. The decision to handcuff someone is base on a risk assessment.”

What was the risk that made it “entirely reasonable” to handcuff a pregnant woman in front of her young children? Cornelius continues, “Now this wasn’t some casual encounter, this was our members attending a premises to execute a search warrant because we believed, on reasonable grounds, that the individual and the premises that was the subject of that search would provide to us evidence of involvement in that serous offense of inciting a protest.”

“I showed you the video, there in Victoria, of these cops coming into the home of this 28-year-old pregnant mother. The boyfriend videoed it and put it live out on face book so the whole world got to see what was happening but this is not the first time they’ve done a raid like this,” reported David Knight.

“They came in and arrested her, she was crying, very distressed, far along in her pregnancy, they didn’t care. What was her crime? Her heinous crime was that she was organizing ‘Freedom Day’, where people would get together and address their grievances against the government for this draconian lock-down.”

They had evidence of that that this “hardened criminal” had committed the serous offense on “inciting a protest” with a Facebook post. In Cornelius’ eyes that made it entirely reasonable to cuff her and search her home in case she was hiding any more Facebook posts somewhere in her home.

But he also pushed more attacks on free speech, predictably social media censorship on behalf of the government.

In another press conference about the same indecent Cornelius was asked “What responsibility do the social media platforms have at this time?” Cornelius replied, “Well I have to say, we do engage with social media platforms. And social media platforms have become increasingly concerned about online activity and how that can translate to real harm and impact in the community. And I’m certainly aware that on occasion these platforms themselves have been taking proactive action to shut down sites and to address individuals who might be engaging in conduct which is contrary to the terms of use that any user has to subscribe to if they’re to have access a platform. So that is a piece that is happening in the background but the key piece is as quickly as one site is shut down a new one emerges. So, you know it’s something that keeps us and our partners very busy.”

But this is all for a medical emergency, right? As elsewhere, the government’s own figures show that the fatalities and presumed test cases are not any different than any other season but this one state has caught the Chinese virus of TYRANNY.

“I want you to see this video that was sent to me of the same Victorian police department taking a knee during a recent Black Lives Matter protest. If people get together to protest the measures taken by this Chinese puppet who’s running the state of Victoria in Australia people could die, so this justifies them going in to the home of a pregnant woman and dragging her out in handcuffs for a Facebook post. But when the police themselves show up at this rally to take a knee it’s not a problem. It just depends on the politics. It’s not about health, it’s not about science, it’s about tyranny and their tyrannical politics,” said David Knight.

But did the Australian police discriminate in the enforcement of these two protests? At a previous BLM rally of 10,000 people, the Victorian police department took a knee with the protestors and fined 3 people, arrested NO ONE. Social distancing and mask orders were in place (and violated) but the Victorian police say there was no prohibition of being in public if the measures were followed (they weren’t).

Today, people are under house arrest 23 hours a day, 7 days a week. It is winter now in Australia. Soon it will be the winter of our discontent as we can expect the arbitrary mandates to increase as they have elsewhere.